I published these on Twitter and Google+ a little over a week ago, but felt they were worth posting on the blog as well!

So if you recall from my previous post I mentioned that the tile map technique allowed for really REALLY big maps. How big, exactly? 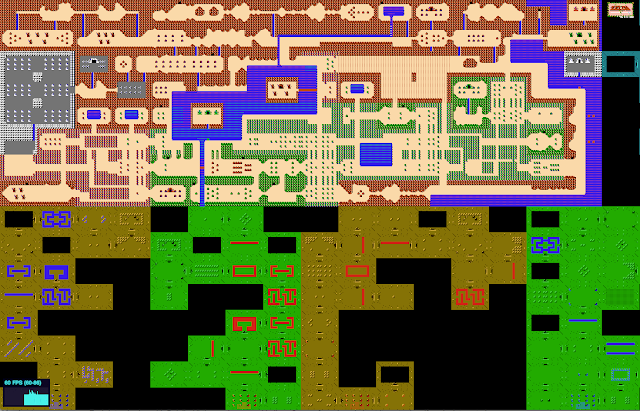 (The effect is best when you zoom in and out with the mouse wheel to get the full scope of what's being rendered.)

And THAT is a small map. Seriously, here's the two images that make it up (original size):

The main map file (dark one on top) is 512 x 325, and you could easily fit a 2048x2048 texture onto any WebGL capable device, so that's a lot of room to spare. If you wanted to you could fit this map, plus every map from Mario 1, 2, and 3, plus Metroid's map, plus a few more to boot into a single gigantic map and still have room to spare on any desktop machine!

(Yes, the sprite sheet would have to be pretty large at that point, possibly split into several different sheets, but it's still very workable.)

Just for fun I also did a version with the two overworlds from Link to the Past too: 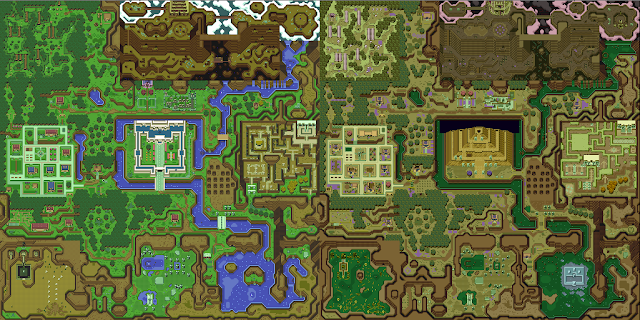 This one is slightly smaller but has a much larger sprite map for comparison.

These were both created by stitching together some really large PNG files that I then pushed through a small HTML utility I cooked up (That link won't show anything, but the source is the interesting part). It essentially would blit 16x16 tiles from the large PNG into a canvas, generate a hash based off the image data, store unique tiles in the sprite sheet with the appropriate offsets in a table, and then write out the appropriate pixel value to the map canvas as it goes. Simple and effective.

I've actually got a few other ideas that I want to pursue with this now, but I'm not sure how well any of them are going to work. I'll post things as I can. In the meantime I've been thrilled to see a couple of other developers grab the idea and run with it, with the code being successfully "ported" to both XNA and Unity!