I will not be playing your game today

I've always considered myself to be a gamer. I've been fascinated with video games since I was very young and the NES was hot stuff. I would never think to describe myself as a "casual" gamer: I can still headshot you from half way across the map in Team Fortress 2 with ease. I've beaten multiple Final Fantasies, and will fervently argue that VI is the best in the series. I still chuckle if I ever hear someone say "Would you kindly...". I've always wanted to build games, which is why I started teaching myself graphics development in Junior High. Gaming has long been an important part of my life, and is a big part of why I'm in the career I am today. In every sense of the word I am a Gamer with a capitol 'G'!

Except, um... I've been playing a lot more Angry Birds and Cut the Rope lately than Dishonored or Borderlands. Actually, that's pretty much all I've been playing. I feel vaguely guilty about that: it's hard to claim that you're a "hardcore" gamer with a straight face when most of your gaming time is spent slicing fruit instead of shooting aliens. But, at least I've a good excuse! His name is James: 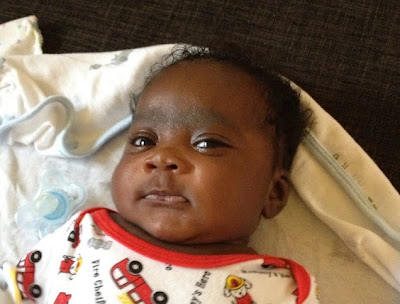 Yes, I've added "Daddy" to my resume. And, for those of you who have kids I don't need to explain that, especially at this age (2 Months) it's a full-time job.

So that's it, right? My "serious" gaming days must be over. Well, no. At least I don't want them to be. The problem is that the limiting factors on what I can play has shifted dramatically. It used to be, back in High School and College, that the limiting factor was money. I had lots of free time and very little funds. For a while now, though, that situation has been flipped. I'm happy to spend a decent amount on my gaming habit. I frequently buy indie games I will never play simply because I want to support the developer. But my ability to sit down and really get into a game has diminished as the rest of my life becomes more demanding. These days I can typically expect to have no more than 15-30 minutes of time available for a gaming session before "real life" starts calling again.

Obviously this is why iOS and Android games have been so appealing lately. I can clear 5 stages of  Bad Piggies in 15 minutes. In the same period of time I could probably watch a third of the opening cutscene for the latest AAA title. So it seems that I've been exiled to casual land forevermore.

But why does it have to be that way?

I still want to experience the Skyrims and Bioshocks of the gaming world, and if I have to do so 15 minutes at a time then so be it! The real problem is that many games simply don't allow you to play like that. Game developers seem to be completely oblivious to how many barriers they willfully put between players like me and their game. And the sad part is, it doesn't take much to turn me off. To give an abbreviated list:
Oh yes, and finally:
Does that list seem harsh? It is. The point is that if I feel that a game isn't respectful of my time I will spend it somewhere else. Free moments are precious, and the fact that I would choose to spend them on your product (and pay to do so!) is a privilege. Don't abuse it.

Most the games that fit my criteria are (surprise!) mobile games. But there's no reason that the larger console and desktop games couldn't satisfy much of that list. I'm a programmer, I'm sympathetic to the technical challenges behind things like short load times and the like. I'll cut you some slack if I feel like you're trying. But a lot of items on that list are the results of sloppy development, overbearing publishers, or designers that can't stand the though of you missing out on their intended "experience". I have no patience for any of that, and those games are welcome to enjoy their audience of teenagers.

After all that ranting I feel like I should point out that there are some non-mobile games that do well with this, though they tend to be indie games and not big studio affairs. I've been having a lot of fun with FTL lately, though honestly I'd love to have that one on my Nexus 7 or as a web game (which would be perfectly feasible!). Games like Braid, Limbo, Cave Story, and Super Meat Boy, are great at providing rich experiences in bite-sized chunks.

I'd love to see the kind of gameplay-focused attitude of these smaller studios applied to something larger scale, like Assassins Creed or Crysis. I'm happy to consume these worlds in little bite sized chunks, knowing full well that it'll take me a year to work my way through a single title. Unfortunately there's typically just way too much overhead between me and the game. So these lovingly crafted, deep and involving games sit on a digital shelf, looking very confused as this hardcore gamer throws yet another bird at those pesky pigs.