I'm not dead yet!

Just wanted to drop in and leave a quick note to say that I haven't abandoned the blog, and I actually have a fun little project under way! Unfortunately I don't want to talk about it much at the moment, since I feel like this is something that could actually be marketable (probably via the Apple App store/Android Market). I'm also considering submitting it in it's web-based form to the Mozilla Game On competition. But that depends on how quickly and how well I can polish it up.

In any case, it is a game and I'm developing/prototyping it using HTML 5 tech like Canvas (no WebGL this time around, sorry!), Audio tags, and WebSockets. Great fodder for blog posts, but once again I would very much like to have a more complete version before I go chatting it up. Expect some updates in the next few weeks though! Even if I'm not talking about the game itself I'll probably want to talk about my experiences with the HTML 5 stuff. (I feel a rage post about the Audio tag brewing as we speak...) 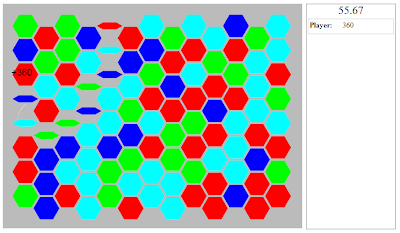